Considering the range of prices for a drone these days, the decision is sometimes as hard as buying a car.

However, quadcopters can also get cheap and still deliver what you’re looking for at most. Here’s a list of the best drones under $200 where you can learn more about potential choices.

Just as with most technology equipment, after a certain price, the additional functions get more expensive and become more of a gimmick than real useful things.

This is why we’re going to do an overview on what are the most important aspects you should look for in a drone.

You might think a camera is totally necessary to have on a drone, but you might be wrong.
There are many situations where a camera on the drone will just drain the battery faster and increase the price a lot without serving the original purpose.

Does a beginner drone need a camera?

If you want to learn how to fly a drone for the first time and want something to play around and maybe break without a sweat, you might not want a camera.

There are quite a few drones around $20 that are so cheap you can buy a bunch of them and become an expert at drone flying.

There’s also the fact that a cheap drone camera will suck big time. Most cameras on drones under $100 are low quality, usually under 720p and definitely not stabilized by a gimbal.

It’s 2017 and yes, you can! There is a specific drone I’m thinking about. It’s called MJX Bugs 3 and not only can it carry a go pro, but also has very good battery life and powerful motors.

Using your action camera along with a drone will be the cheapest way to go, provided you already have an action camera beforehand.

How much does a gimbal stabilized camera drone cost?

Usually the cost of a motorized gimbal that can hold your action camera and can be mounted on a drone is over $70 by itself. But make no mistake, by having a gimbal stabilized camera you’ll get way better footage.

So if you’re a professional trying to shoot smooth cinematic video, you better buy something well done and spend more. But I don’t see the point of getting more than a DJI Mavic or Phantom 4 Pro. The new DJI Spark also has a very good gimbal for $500.
Motors

There’s two types of motors that are VERY different from each other.
Well… they both do the same thing but in different ways.

Brushless motors are pretty much the better ones, by far. However, they are considerably more expensive than brushed ones. This makes the drone price raise a lot.

Why would you want brushless?
• they last longer in time (at least 10 times as long)
• they are more powerful (you’ll be able to fly faster and carry more weight)

Why would you want brushed motors?
• makes the drone price go down (you’ll only find these on cheap beginner drones under $100)
• because they are cheap, they are also easy to replace, so if you buy a few spare ones you’ll be able to prolong the drone life more.

As you may know, some drones have GPS inside them that allow these quadcopters to fly very precisely and maintain a certain fixed spot.
Not only that, more expensive drones also have return to home technology. There are drones like the Hubsan 501s and Bugs 2 that have both GPS and return to home for around $200.

How about other functions?

DJI is the biggest drone company on the market and there’s no denying the fact that their drones are very advanced.

Most of their quadcopters have forward facing sensors that can detect obstacles and make the drone stop in time. They also have bottom sonar and cameras to be able to fly inside and land in proper places. The bottom sensors are also found in very good drones like the Xiaomi 4k drone and Phantom 3 series.

If you consider these sensors to be gimmicks to you, then stick to the points I made before and you’ll still have a rock solid drone.

Most drones that are over $500 tend to have different modes that will make life easier for you. Before buying a drone you should first think if setting waypoints ahead of time and planning your flight is of any help, and also if other modes like automatic circle flight around objects can be used to improve the quality of your videos.

This is pretty straight forward.
If you’re getting a drone camera over $200 you should have at least over 500m range, and it goes up to 7 km for drones like Mavic Pro from DJI.

If you want to just play around, do some tricks and maybe get some video in a park, then a standard 100 m range should be good.
Battery life is more important than you may think, but the thing is that even if you’re low on it you can compensate by getting additional spare batteries.

I like to usually have over 10 minutes at drones that are over $60 and more on more expensive ones.

There are many things you can nitpick for drones in general, but we’ll cover that in another article.

So stay tuned for more.

Drone Footage have become famous and popular on the internet nowadays. It’s very normal to see the footage from all over the world whilst more and more people entering the world of drones. Drones are affordable and accessible these days and nearly anyone can be able to manage to fly one.

However, flying a drone is one thing while shooting good quality footage with it is completely a different thing.

To impress your viewers with your Drone Shots, your shooting should be on a top level. After watching your Drone Footage, it becomes clear in your viewer’s eyes in seconds whether you actually know what you are doing or not. There is no doubt that using a Drone needs enough practice and some skills and planning to
make the best out of it. The more you practice flying your Drone, the more you become better on it.
So, here I am sharing with you a bunch of tips that will hopefully help you to make your drone footage more natural and realistic.

You should always plan your shot before starting to fly. What do you want to get from the video, or which angle you are going to capture, everything should be planned. I know it is very tough work to plan everything from the ground as you don’t get the whole picture from the above but trust me, at least trying to have some ideas about your path and lines helps you to get better footage. Picture your
expected movements in your head and start practicing them. It’s impossible to get that flawless and perfect view, but by practicing them you can have a nice, smooth and steady result in the end.

2. Slow and steady wins the race

The best footage comes then when you start shooting by flying slow. It allows you to capture the footage vividly. By flying slow, you’re giving some time to your viewer to understand the whole scenario and dig into it. It creates a cinematic feeling in your video which should be your main target.

As an aerial videographer, you should always keep in mind that flying high endangers your drone and your footage, especially when the wind speed is high.
Flying high is good but it doesn’t mean that you should do it all the time. It’s very risky if the wind is around 15-20 mph, it could probably damage your drone. Thus, to capture some nice and steady footage, I recommend flying lower, where the wind speed is not that high, the drone will be more controllable.

Flying backward is one of the cool techniques to make your drone footage more natural and cinematic. When you move forward, you’re focusing only on one specific detail. But when you’re flying backward, it reveals more details in your footage such as
trees, lakes, buildings, hills, people, etc.
Though to some of you, flying backward might seem difficult, which is totally okay. You can use the speed duration tool in your video editor to reverse your footage. 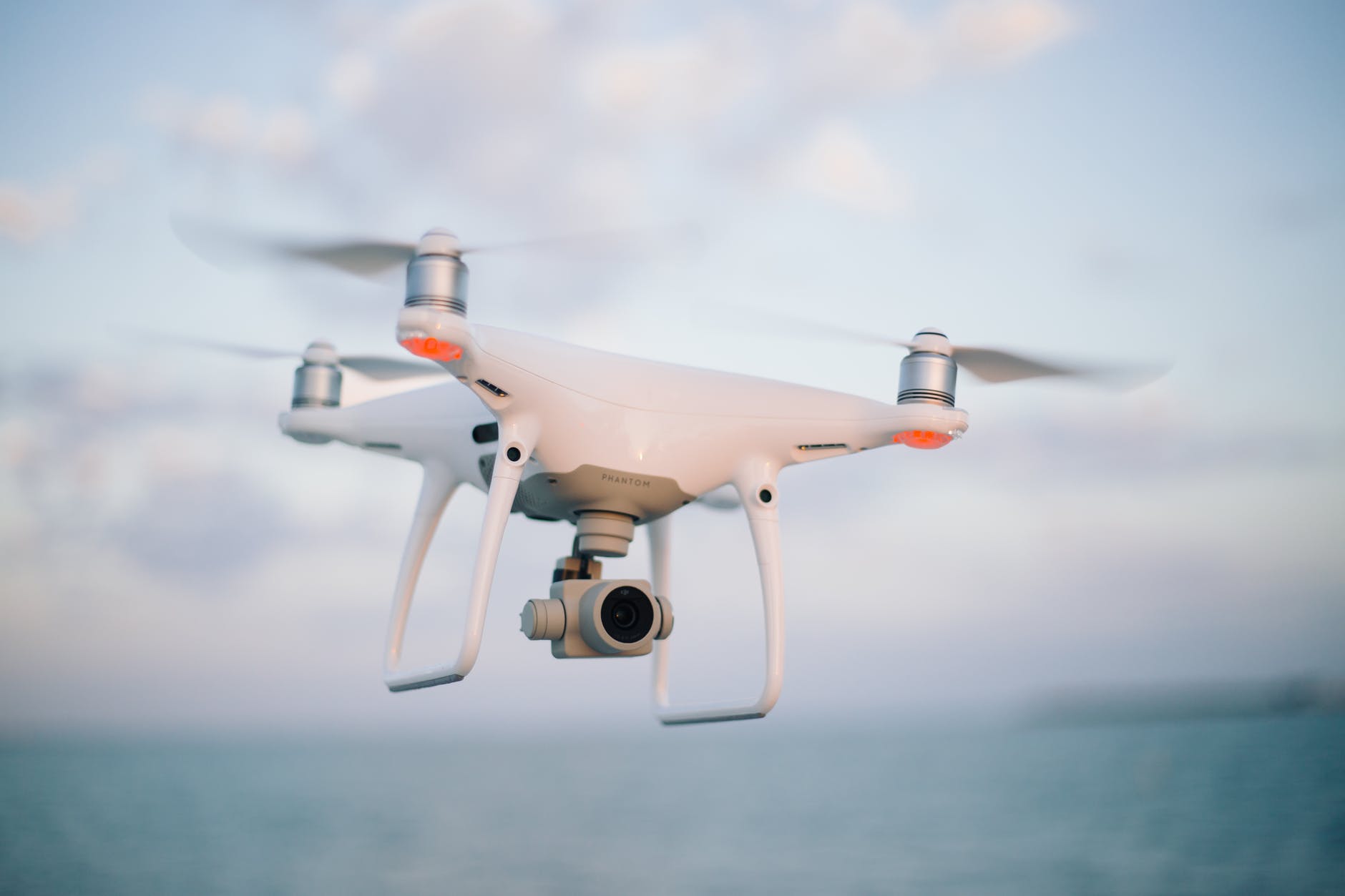 You can’t just move your camera here and there to bring the cinematic feeling to your footage. Jerky movements are really disturbing to the viewers and it kill the liveliness of the footage. They make the video look robotic. I recommend you not to switch your speed and angles constantly but rather keep your position steady and use controlled and smooth movements as much as possible. By doing so, the video will feel natural and cinematic.

6. Don’t rush to the main object

It is a common rookie mistake to start shooting your main object at first sight. You must always keep a storyline in your footage. Add some contexts first, it brings excitement to the viewer’s eyes. Build up your shot, and slowly fly over your object and reveal it.

The term Golden Hour refers to the period before the sunset and after the sunrise, when the sunlight is warmer and softer than the usual. Using the camera in the afternoon can damage the exposure because of the bright harsh light of the sun. Thus, I highly recommend that you shoot right before or after the sunset. It
will make your landscape shot look professional and beautiful.

Adding a zoom is an easy way to create that nice and cinematic atmosphere to your shot. Keep it small and smooth, don’t make it too clear-cut or too obvious. This way, the viewer gets carried in really slow. The dolly zoom effect can also be a very cool technique, it is very effective for 4k footage which is outputed at 1080p for
the final video.

Music is like wings to the viewer’s mind. A piece of perfect matching music with your footage could help making your video popular. It beautifies your footage and brings the natural feeling in the video. Do not add music which doesn’t suit to your video, your video
might end up being weird in the end. It’s difficult but there are a million of audios on the Internet, get one with the permission and add it to your video.

To get the best out of your shots, you need to know how to edit your drone footage. It is one of the most important post-production processes. It manipulates and rearranges your shots for your the final product. Titling, color grading, sound mixing are very important tasks for aerial videography. Remove the unwanted footages, pick the best ones, create a flow, add effect, graphic, and music and you’re ready to shine.

Always bear in mind that, safety first. Drones are tools. You can’t treat them as toys.

Launch the drone into the sky within the law in your area and within your limits.

I hope with these quick tips you can explore and generate some cool content.

If you have more tips or ideas on how to make cool and professional videos please post them below!

John O. Brooks is a photographer, videographer, and a technology freak. He loves to live in the camera world. His camera is the best friend of him in this world, he says. He finds peace sharing his knowledge through developing contents about
photography and videography.